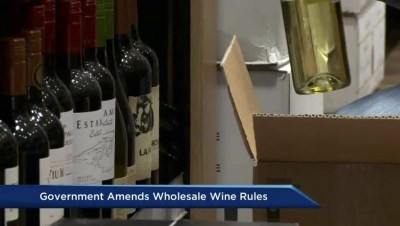 A trade dispute over wine could be fermenting between British Columbia and California.

The Wine Institute of California has written a letter to the provincial government, arguing that new rules going in place later this year run counter to Canada’s international trade agreements.

At issue is a number of initiatives announced in December as part of the government’s ongoing liquor reforms, including allowing B.C. wine to be sold alongside food in grocery stores, and the creation of a limited number of new licences to exclusively sell B.C. wine.

READ MORE: B.C. wine to be stocked in grocery stores alongside food

“We believe that the proposal allowing only B.C. Vintners Quality Alliance (VQA) wines to be sold at B.C. grocery stores should be withdrawn or modified to allow for the sale of imported wines. Since these new opportunities are not extended to imported wines, they violate Canada’s international trade obligations including NAFTA, GATT and the EU-­‐Canada Agreement on wine sales,” writes VP Tom LaFaille.

UBC Political Science Professor Max Cameron says the government may have to reconsider the new policies.

“There’s every reason to believe that since on the face of it, this is a form of discrimination against an imported product, such a challenge could be successful,” he says.

“What that could mean is either we have to make space on the shelves of B.C. groceries stores for imports, or we’d have to withdraw the legislation.”

In a statement, a spokesperson for Attorney General Suzanne Anton acknowledged that they received the letter, but didn’t indicate any changes were forthcoming.

“International trade agreements recognize that products should be treated equally and fairly. Our intention with our changes is to allow liquor in grocery stores is to find a balance that meets these requirements and also promotes the quality local products that are made and bottled in B.C.”

The changes are scheduled to go in effect on April 1.