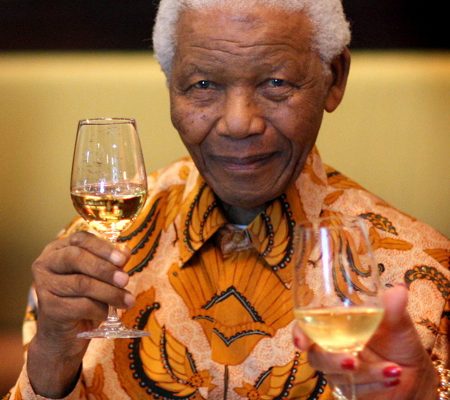 Opportunities for fine dining may have been somewhat limited within the confines of Victor Verster prison in Paarl, but Nelson Mandela always enjoyed a small glass of semi-sweet Nederberg wine with his Sunday lunch during his incarceration. Today, Mandela’s legacy is set to become entwined with South Africa’s R20 billion (£1.75bn) wine industry.

At a low-key tasting and reception in Johannesburg’s modern Sandton Square complex in July of last year, the first three wines in the House of Mandela range were launched by Mandela’s eldest daughter Makaziwe, her daughter, Tukwini and Mandla Mandela, the new chief of the Mandela clan. At the age of 92, Mandela will not be personally involved with the project, but he has given it his blessing.

On his travels following his release between 1992 and 1994, Mandela was careful never to endorse any one product personally. But when he was photographed with a Cape wine in his hand, a Nederburg, he took the opportunity to say that while in the past he had asked people to boycott such products, he had changed his mind and was now asking for support for them. Today, he has that support. South Africa produces 805 million litres of wine, more than three per cent of the world’s wine, and exports half of it.

When Makaziwe Mandela was first approached with the idea four years ago by her Norwegian friend, Camilla Bernal, her first instinct was to say no, especially since the Norwegian company were keen to put Mandela’s face on the label. Makaziwe made it clear that it just wasn’t done in Africa to put the face of one member of the family forward in that way.

The Norwegians changed tack and suggested it be called the House of Mandela, telling the story of the family’s ancestors, Mandela himself and his legacy. Makaziwe saw the potential and gave it the green light. The new House of Mandela website with the bee as its family crest (www.houseofmandela.com) recites the Mandela family ancestry in proud detail.

Although she knew little about wine at the start of the project, Makaziwe always had at the back of her mind something her father had told her: ‘if you don’t drink wine, the world won’t accept you’. She was also reminded that her father, while a man of principle, was not inflexible. She came round to the idea of the project as a way of embodying the spirit and accessibility of the Mandela family.

At the same time, she saw the opportunity of establishing a black brand capable of setting new standards of quality and sophistication in the new South Africa. ‘Traditionally South Africans are more into hard liquor than wine but I think if we help to demystify it, more and more black people will come to appreciate what is after all a wonderful drink’.

The vast majority of the estimated 275,000 farm workers and their dependants working in the South African wine industry are black, but Makaziwe is acutely conscious that their involvement in the decision-making and production side is as yet far outweighed by the industry’s white Afrikaner dominance. ‘The wine industry has been slow to transform’ says Makaziwe, ‘but the time is right for that to change’.

Since deciding to go ahead with the project, Makaziwe has been involved at each stage, from selecting the blends with her consultant Lynne Sherriff MW, to researching the global wine trade and organising the launch. The first three wines are a 2009 Chardonnay from Thelema’ s Elgin Sutherland property, selling for 190R (£16.50) and two reds, a 2008 Cabernet Sauvignon from Hartenberg and 2007 Shiraz from Charles Back of Fairview, both selling for 350R (£30). The aim is to accompany the three premium wines with a value for money tier of wines, to be called the Thembu Collection.

In June this year, a meeting with Italy’s famous Antinori family was arranged as Makaziwe is fascinated by this historic Italian dynasty and inspired by the story of Piero Antinori selling his family business and then buying it back. For Makaziwe, Antinori is the model of a wine with a family stamp on it that has both top end and value for money wines. Also among ideas for the future is to involve young black artists in a label design competition.

Married, with four children, Makaziwe Mandela, is Nelson Mandela’s daughter from his first marriage to Evelyn Mase. Born and brought up in the Orlando west district of Soweto, she wasn’t able to visit her father in prison in Cape Town until she was given an ID book at the age of 16.

As social worker, anthropologist, educationist and businesswoman, she is held in high regard in her native South Africa. Thanks to the association of her name, she is well-placed to steer the project both domestically and internationally. She’s a firm believer in individual effort , dialogue and courage, and determined in the face of growing materialism not to lose ubuntu, the ‘caring and sharing’ philosophy of African culture.