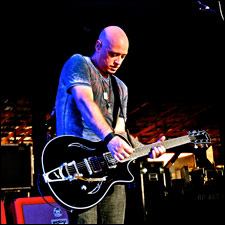 As lead guitarist for San Francisco–based pop group Train, Jimmy Stafford has spent over a decade on the road in support of the Grammy Award–winning band’s hit albums and songs, including “Meet Virginia,” “Calling All Angels” and “Soul Sister.” Along the way, Stafford developed a passion for wine, blogging about his finds and connecting with fans over good bottles. He recently parlayed this interest into the subscription-based Train Wine Club, and has plans on deck for a wine-and-music festival in Northern California and a “Drops of Jupiter” Train wine, named for one of their biggest hits. Stafford spoke with Wine Spectator from his new home in Nashville about the unorthodox way he built his collection, the best countries for wine on the road, and his plans for a new cellar.

BC WIne: How did your interest in wine develop?
Jimmy Stafford: I’ve always kind of dabbled. As I’ve gotten older, I’ve gotten more into wine. The past couple tours I’ve asked for a bottle or two in my dressing room every night. I like to have a glass or two before going on stage and then a glass after. It’s nice to have around for guests. Some nights I drink one bottle and stick the other in my wardrobe case. By the end of tour, my case is full. I’m starting to develop quite a collection. We’re going to do a tour in January of Australian wineries. I’m hoping to collect some good Australian wines. My next big project is to build a wine cellar in my Nashville home.

BCW: You’ve traveled all over. Is there a place that stands out winewise?
JS: We did eight laps around the world in 2010. I love the German beers. I’m not a really big fan of Riesling, so when I go to Germany I stick to beer. When I’m in France or Spain or Italy, it’s all wine. Same with Australia, and I love South African wine as well. There’s a fan of ours from Hungary and every time we play in that region—Austria, Hungary, Switzerland—she comes and brings me the best Hungarian wines. My favorite wines are still the California wines. I don’t know if I’m biased, but I think they’re the best in the world. Cakebread, Jordan, Chappellet, Orin Swift, Wente …

BCW: What have you learned about wine while on the road?
JS: We did a show, Live at Daryl’s House, with Daryl Hall [of Hall & Oates], who is also a big wine lover. We did a segment about wine and I was telling him about how I get wines in my dressing room every night, which can be hit or miss; sometimes you find something new and great and other times you get grape juice. He said that that’s exactly the reason why he requests the same wine in his dressing room every night. I guess that has its pluses and minuses. He doesn’t get to try anything new, but he doesn’t get that occasional bottle of grape juice like I do.

BCW: Do you know what your cellar is going to look like?
JS: I do. I’m going to put it in my man cave. There’s a place in the back of it that’s octagon-shaped that I’m going to wall off and put my wine cellar there. I’m picturing wine racks all around. Concannon Winery, who is going to manufacture our Train brand of wine next year, said they would give me an old oak wine barrel that I could put in the center of the room as a tasting table. I’m really excited about it. I can’t wait to get all my wines out of the boxes they’re in right now.